Originally from Chicago, Illinois, Asaf discovered his passion for music production during his college years studying Computer Science and Economics at Denison University in Ohio. He converted his dorm room closet into a recording booth and began to teach himself the craft of music making. Soon Asaf became a hub for recording within the school and surrounding Columbus area. After graduating in 2004, he moved to his family in Hollywood and eventually relocated to Orange County to work for a book publisher. His boss recognized his passion for music and encouraged him to set up a studio in his unused office space. With minimal gear and few contacts Asaf set up shop and The OC Recording Company opened its doors in 2005.


Asaf's first client D1, a rapper from Boston, was also new to OC, and together they completed projects with well-known hip hop artists AZ and Royce D'59. Asaf launched hiphopbeatz.com and helped D1 secure a record deal. It was a great start! 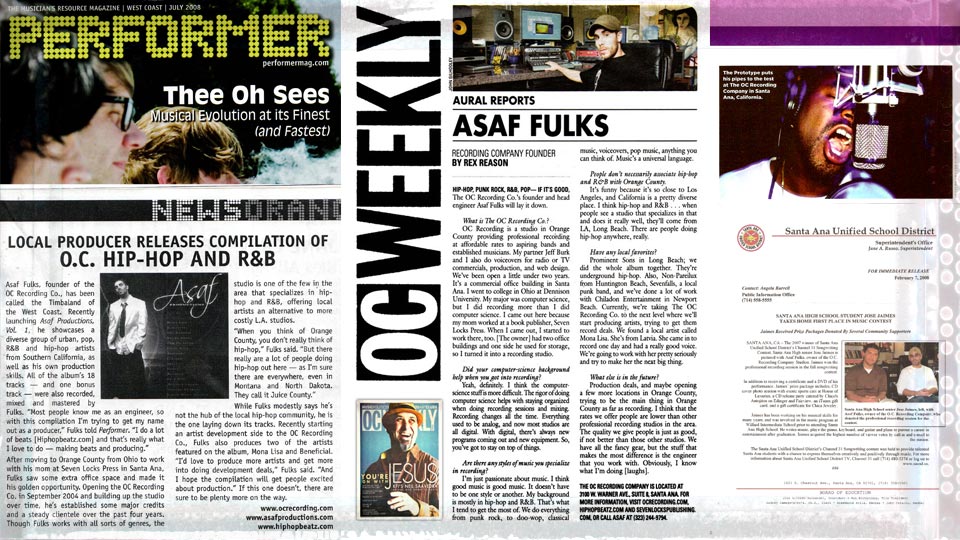 Word of Asaf's talent spread and soon he was booked weeks in advance with a range of projects, from solo artists to full bands. He poured his earnings back into studio improvements and expansions. In 2007, he produced musicforte.com's song of the year for the Medallions, several of his artists won OCMA awards and he was featured in The OC Weekly. His first compilation album, Asaf Productions Vol 1, won him the title "Timbaland of the West Coast." By West Coast performer magazine.


Starting with a dream, focus and persistent dedication, Asaf built not only a state-of-the-art recording studio, but a world-wide reputation for the mastery of his craft. He is also known as an inspiring mentor and for his calming demeanor, friendliness and professionalism. His goal is to continue to produce cutting edge music, develop innovative studio technology, provide clients with high quality recordings and help his students succeed. 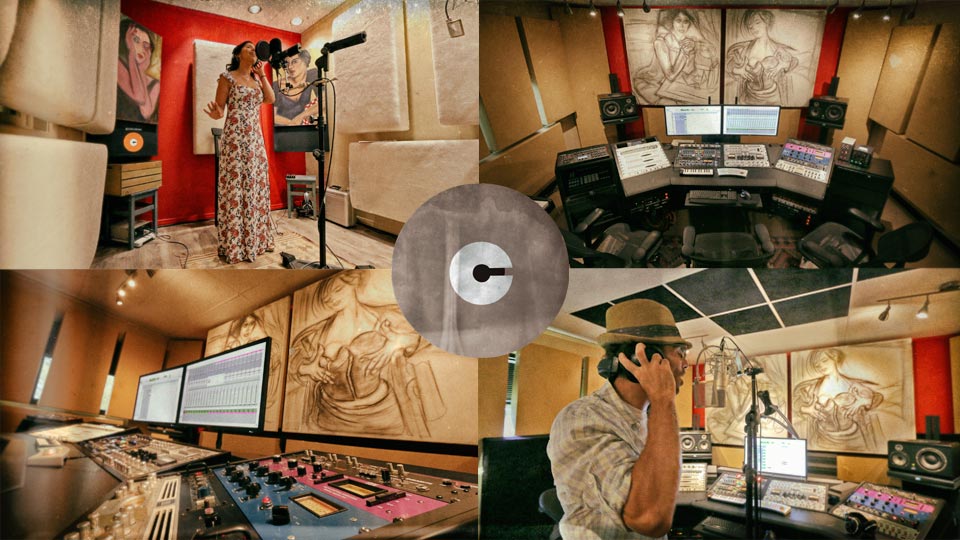 In 2014, Asaf produced, recorded, mixed and mastered Skylar Stecker "Back Around" which has over 3 million views on YouTube! He mixed and mastered three #1 hit records written by Meghan Trainor: "Your Turn" and "Before You Go" by Common Kings and "Flava" by Tenelle. In 2015, Asaf produced the song Get Down for Whosoever South which reached the Billboard Christian Rock charts! 2015 also marked OC Recording's 10 year anniversary. In honor of this milestone, Asaf completely remodeled Studio A.


In 2016-2017, Asaf released 14 original singles which he wrote, composed, performed, recorded, mixed, mastered and created music videos for including "We Belong at the Top", "Run", "Holdin' Me Down", "Collide", "24/7/365", "Sunny Days", "Most of It Now", "Green Roses", "Down With The King" and "Cry For You" off his debut solo album OC Express! The same year Asaf also launched the educational YouTube series IN THE STUDIO with Asaf Fulks which provides tips and techniques on audio engineering and music production. These videos also compare a variety of audio equipment and give watchers an inside look at how he works at The OC Recording Company.


Asaf helped many of his students release songs and music videos under The OC Recording Company label including Josh Robin, Sage Roberge and Ako. Ako's debut single "Never Giving up on Love"ft. Lauga Gauta has earned over 250k views on Facebook


Asaf Fulks was named Now Hip Hop Magazine and thisis50.com 2016 Producer of the Year! In 2017, Asaf enrolled in Taft Law School to study entertainment law in order to eventually add it as a service under OC Recording. In July 2017, Asaf's alma mater Denison University wrote an article about him in Denison Magazine! 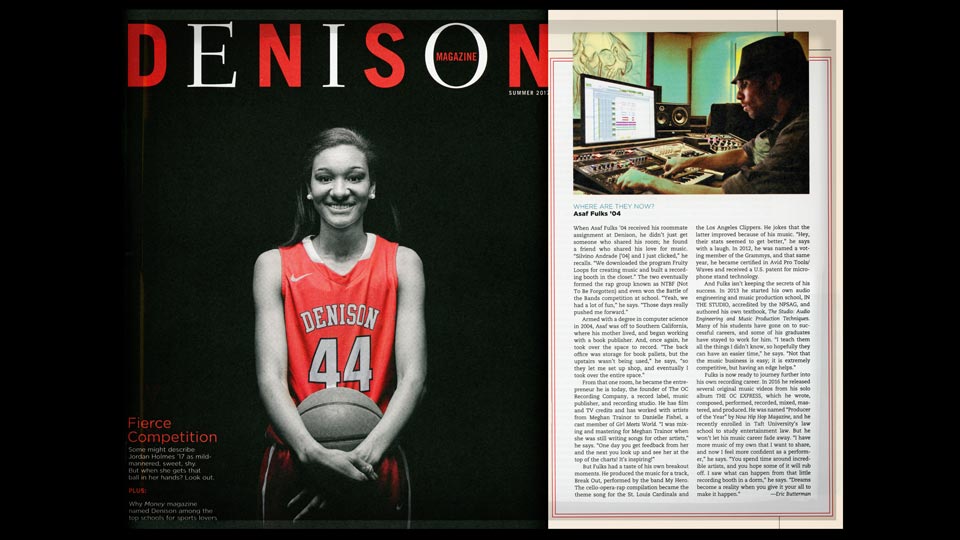 In 2018, Asaf completed his first year of Law School and passed the California Baby Bar examination. He then released LOST DISCS - a compilation of music he produced and engineered at Denison University from 2000-2005 and at The OC Recording Company from 2005-2018. 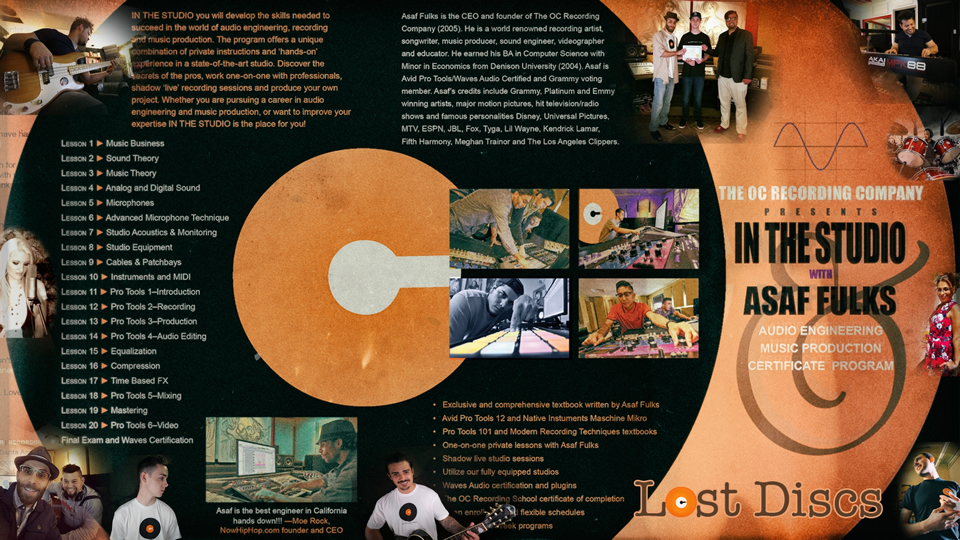 In 2018, Asaf released his instrumental collection and Asaf Production trilogy on YouTube, he launched behind the scenes footage at OC Recording, interviews and live venue performances in Asaf Fulks and Friends. Asaf also launched kirasart.com which features the art collection of Yakira Shimoni Fulks. He also redesigned hiphopbeatz.com and asafproductions.com 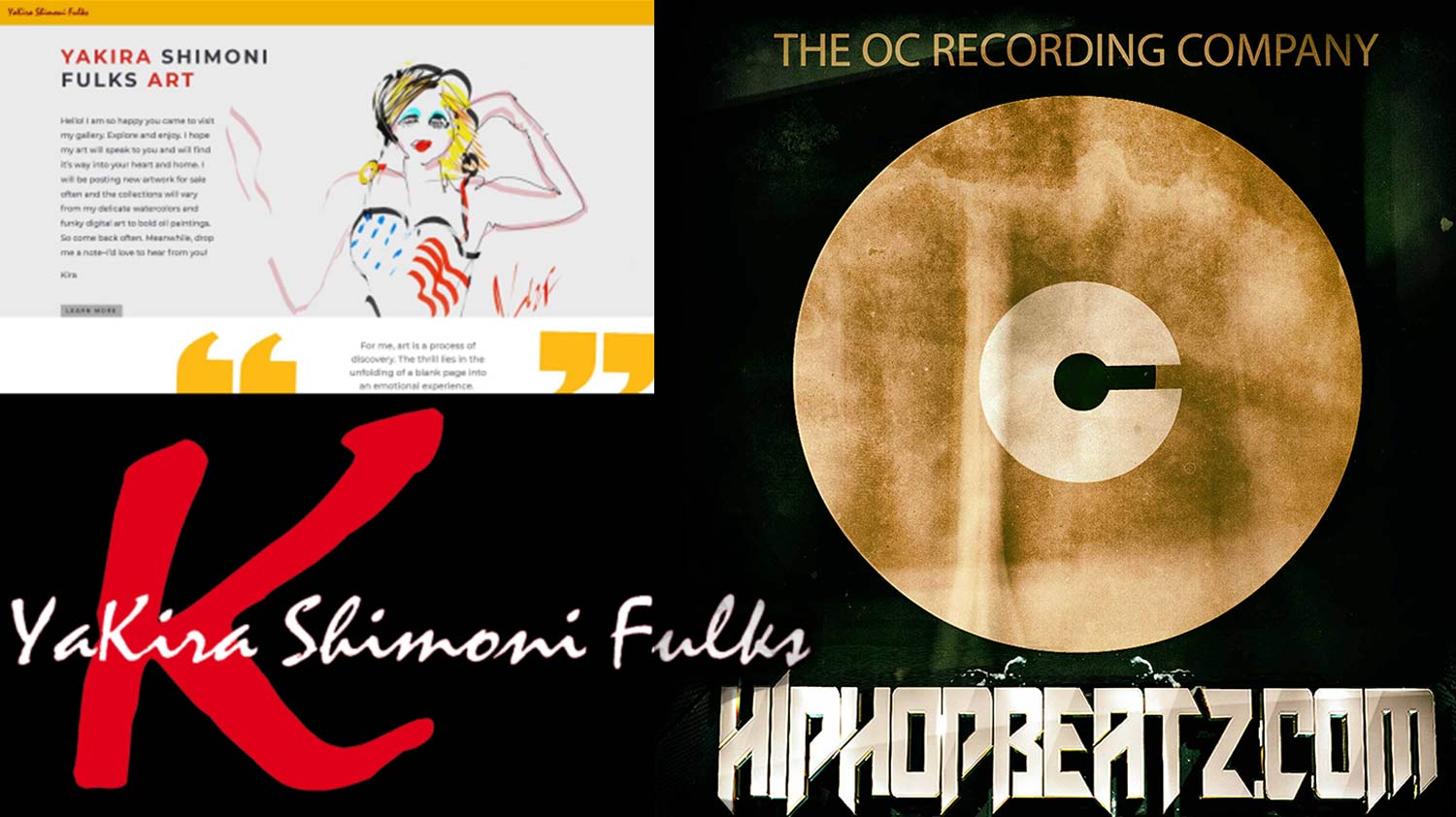 In 2018, Asaf released his second solo album OC BANDWAGON which he wrote, composed, performed, recorded, mixed, mastered and created music videos for all 8 songs. The album includes hit singles "Earthbound", "Cloudfall", "Driftin' Away" and "I Am Down", "Consequences" and "Rear View ft. Yakira Shimoni Fulks". 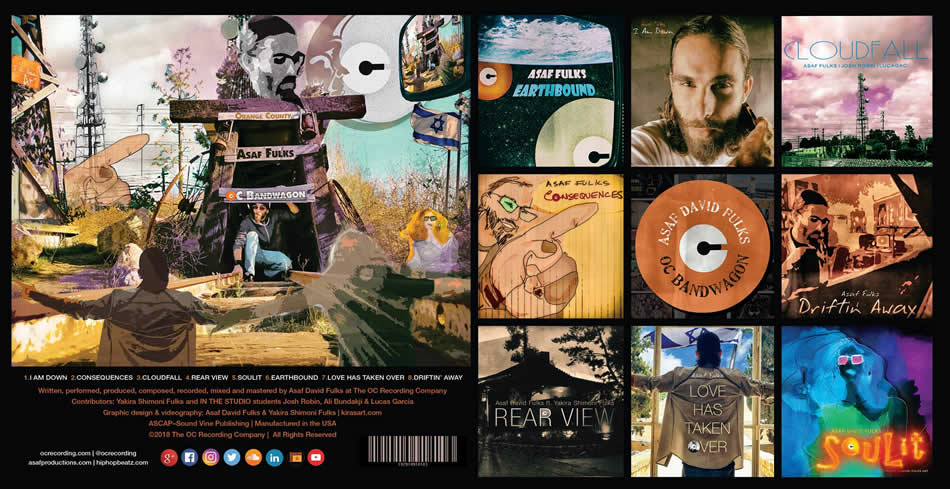 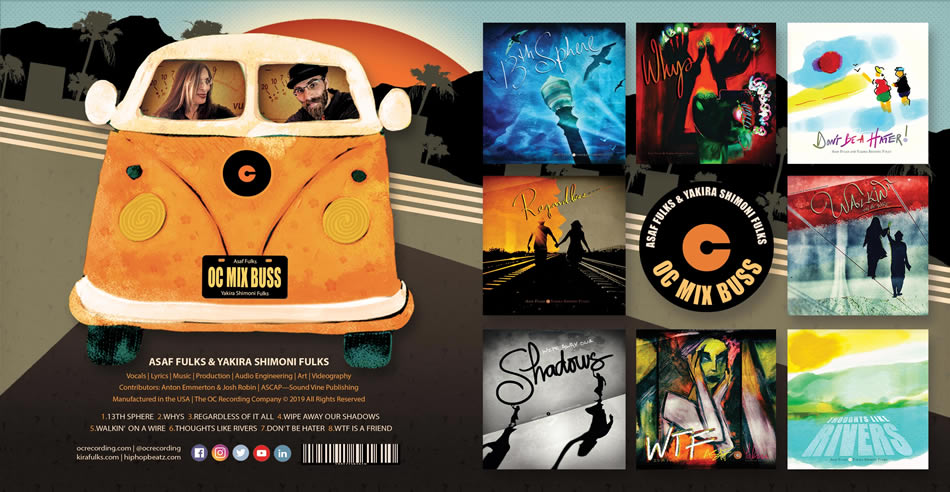 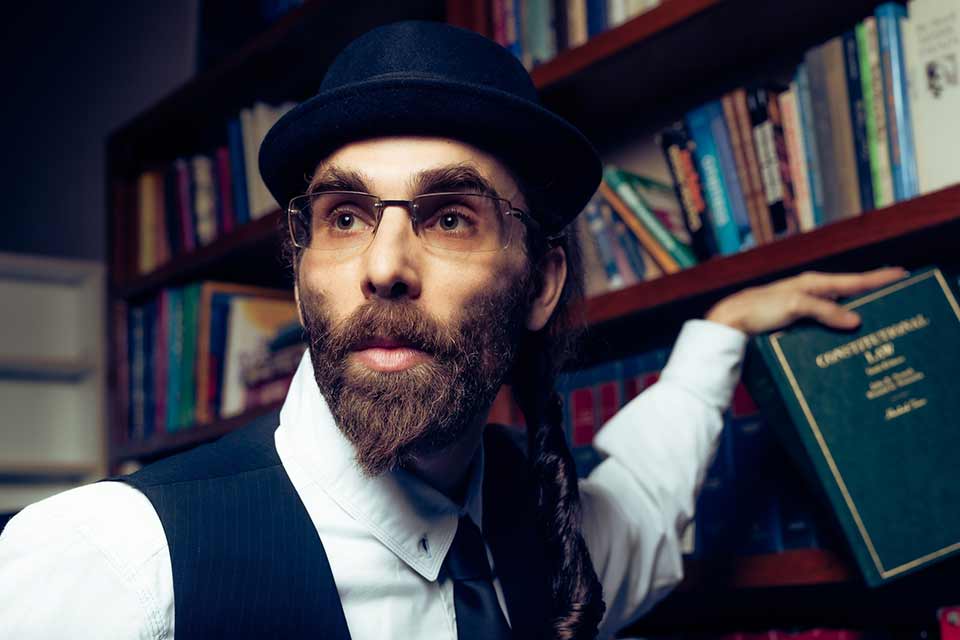 In 2022, Asaf recorded all the ADR for the Black Ranger in Season 2 of Power Rangers Dino Fury at OC Recording. He also recorded audio book projects for Penguin Randomhouse as well as Simon and Schuster. View Asaf's discography and credits at discogs.com and IMBD. 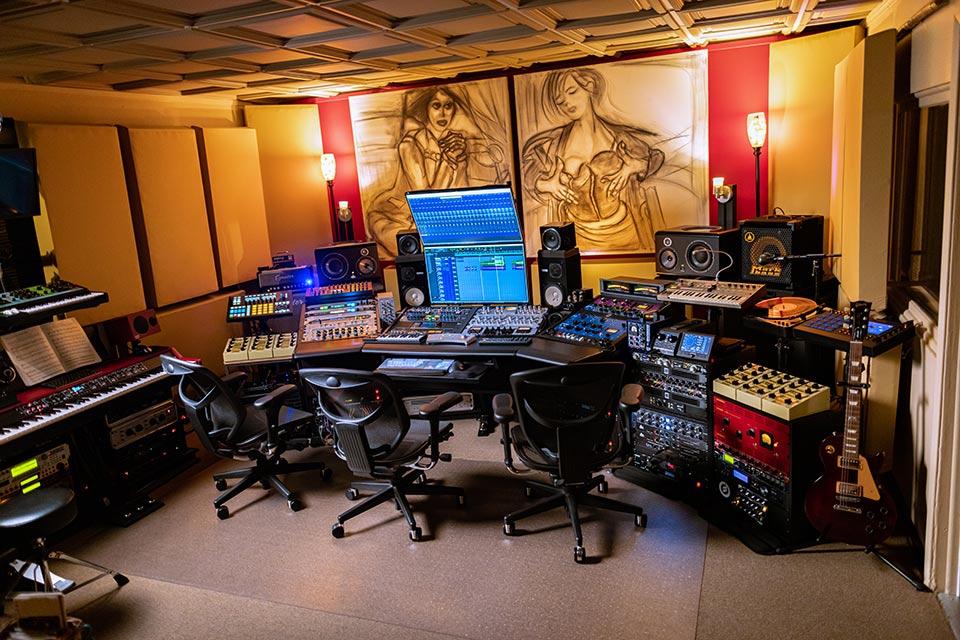 - Fox TV: Heavensent - Professional Skydiver Luke Aikin jumps out of a plane from 25k ft. with just the clothes on his back! (Recording)

Voice Over Credits Include:

- Such a Voice - Voice Over School and Coach Nancy Wilson

Awards, Honors, Degrees and Certificates Include: